The Chronicle of a Successful Pitch

Hebrew SeniorLife, an affiliate of Harvard Medical School and a national senior services leader uniquely dedicated to rethinking, researching, and redefining the possibilities of aging, always has a lot going on.

The nonprofit has plenty of news – from cutting-edge peer-reviewed research studies from its Marcus Institute for Aging Research to building a new affordable senior housing community to winning grants or industry awards and saluting its nursing staff.

While we also support the organization’s news, we also find and tell feature stories that have a longer shelf life and that showcase Hebrew SeniorLife’s senior living communities as great places to live, where residents continue to be creative or give back by volunteering to teach English or achieve lifetime goals. We’re always looking for compelling feature story material.

Hebrew SeniorLife staff come across a story based on their conversations with residents and other times, it comes from surveying residents.

In 2021, Hebrew SeniorLife conducted a survey to see if residents had any summer camp connections since many residents grew up in the region and were likely to have attended similar camps. In fact, the survey found that not only had several residents attended the same summer camps when they were children but that David Rosenthal and Peter Shapiro, two residents of its NewBridge on the Charles campus, first met at Camp Alton on the shores of Lake Winnipesaukee in New Hampshire more than 75 years ago. Incredibly they’d remained friends over the years and Rosenthal and his wife, who already lived at NewBridge, were a big reason that Shapiro and his wife moved there.

Unlike news stories, which have their own challenges, feature stories can be hard to sell because they may lack a sense of urgency to capture busy reporters’ attention. It’s an uplifting story at a time when we could use a positive story but the first question was how and where to pitch it.

The first opportunity was to write and place it as an advertorial in the Jewish Journal. We interviewed Rosenthal and Shapiro, and found them to be charming, funny, very vital, with amazingly detailed stories from their camp days. They also compared NewBridge to the Camp Alton experiences because both offer activities to keep active and engaged, which was a great message for NewBridge and Hebrew SeniorLife.

Once the Jewish Journal advertorial appeared, we pitched that story to JewishBoston.com because their reporters were developing several articles about summer camps, and they were intrigued about a 75-year-long friendship that started at a Jewish summer camp.

We then sent the JewishBoston article to other, noncompeting, reporters, including some at the Boston Globe and NH Chronicle, because it proved that the Rosenthal-Shapiro story was compelling and worth covering.

The NH Chronicle producer was interested but then decided to pass. But after the Boston Globe ran its story, we sent that article to NH Chronicle, which was enough to nudge the producer forward.

The segment, which aired on NH Chronicle was entitled, “They met at summer camp in the 1940s and fate brought them back together,” and featured interviews in which Rosenthal and Shapiro discuss very clear camp memories including camp songs, and positions NewBridge as offering the best of camp activities.

Highlights from the NH Chronicle segment include: 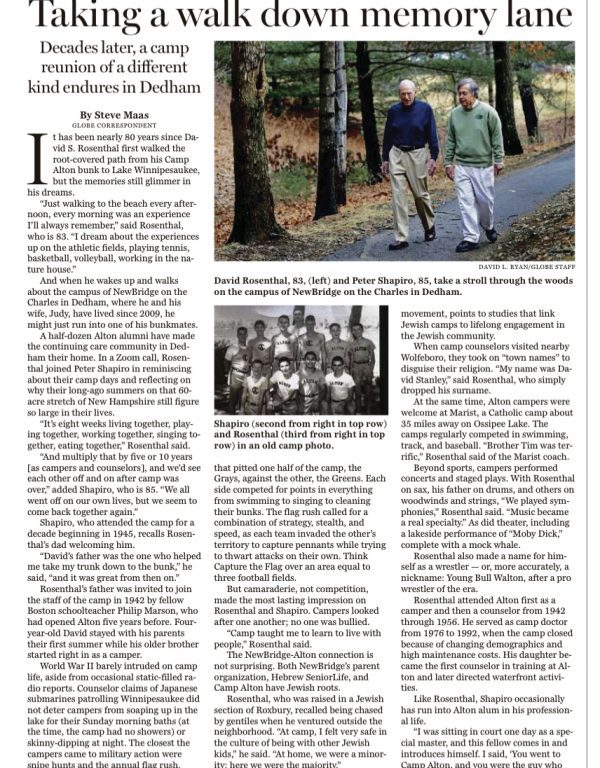